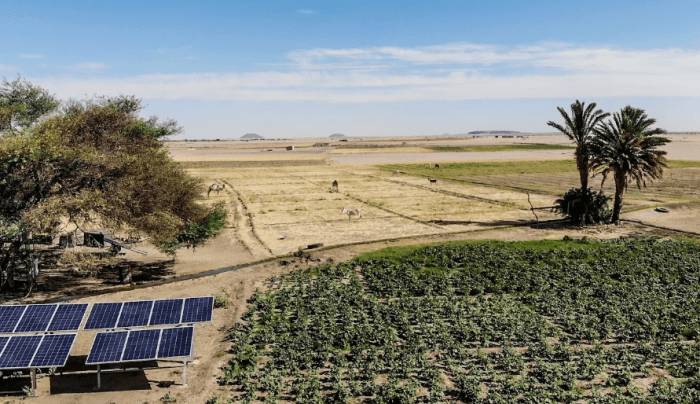 The world’s population is expected to increase from 7.7 billion currently to 9.7 by 2050. Africa has the highest rate of population growth among major areas in the world since more than half of the global population growth is expected to occur in Africa.[1] The rapid increases in population would emphasize the issue of food security, Simultaneously the energy demands are projected to grow at a more rapid speed especially in sub-Saharan countries. The agricultural sector is affected by Climate Change due to the variability of rainfall and drought what led to severe food insecurity in rural areas where farmers depend on traditional agricultural methods. In sub-Saharan Africa, approximately 78% of large- and small-scale irrigation schemes use surface water, while 20% make use of groundwater resources[2].

Agriculture is one of the sectors that can solve these issues regarding the increase in population and energy demands by providing enough food stock and bioenergy such as energy crops and biomass. In fact, implementing sustainable agriculture which balances and meets mankind needs for food and energy without soil degradation or affecting future generations demands. As the prime connection between people and the planet, agriculture can help achieve multiple Sustainable Development Goals (SDGs.[3] With sustainable agriculture we can fight poverty and hunger were properly nourished, children can learn, people can lead healthy and productive lives and societies can prosper. Improving the irrigation system is a key strategy to enhance agricultural productivity and stimulate economic development to achieve agricultural sustainability[4]. By improving the irrigation system especially in rural areas we can improve land productivity, enhance food security, grantee higher and more stable incomes for farmers by allowing them to do multiple cropping and crop diversification instead of seasonal farming which is usually after floods or rainy season to all year round farming.

To improve the irrigation system we need to address the “food-energy-water nexus”. Interdependency between energy, water, and food is the core relationship between these resources. Food production demands water and energy. Energy is a pre-requirement in every step in food production from land preparation and fertilizing to packaging, storing, and distributing. The same goes for water extraction, treatment, and distribution where energy is needed in each step. Simultaneously energy production requires water in hydropower, tidal, and wave power as well as using water for cooling and heat-exchange in fossil power plants. This interdependence shows how the demands of one source can drive the demand for another[5] and why energy and water efficiency measures and renewable energy are core processes in sustainable agriculture to meet the future food and energy demands of a rapidly growing human population.

One of the critical problems currently being faced by Sudan is ensuring a sustainable economy given that agriculture contributes 27% of the GDP and employing about 80% of the workforce in rural areas. That is why irrigation plays a crucial role in the country’s development. Currently, there are many projects aiming at implementing solar water pumping systems in Sudan such as Solar for Agriculture; an ongoing project that aims at promoting the use of solar water pumps for irrigation in Sudan, by targeting 1468 solar pumps in the Northern state, the project expected to be concluded in the year 2021[6]. The African Development Bank (AFDB) has another project in the west and north Kordofan states.

Sudan possesses a relatively high amount of solar energy, the annual global horizontal irradiation (GHI) varies between 2118-2483 kWh/m2/year[7]. Sudan photovoltaic electricity potential is shown in Fig. 1. Till now the contribution of solar energy is only 19 MW [8].

This study intends to provide techno-economic analysis of hybrid PV-diesel and stand-alone solar water pumping system while comparing their performance and environmental impacts with diesel water pumping system. The HOMER optimization software is used to evaluate both the environmental and the economic viability of the proposed pumping systems by the variations of both solar radiation and diesel price. A farm in the Al-Ailfun district has been used as a case study

The case study is a farm located at latitude 25.14, longitude 25.32, and altitude of 1302 feet in Al-Ailafun; southeast of Khartoum. The farm size is three Feddans (1.26 ha) which is equivalent to a 12600-meter square. The farm uses a diesel generator for irrigation. However, due to the fuel scarcity, the implanted area has been reduced to two feddans during the last two years. The farm is considered a mixed farm that consists of both plants and animals.

Solar water pumping systems come in many forms for many different solar-powered pumping systems contain the following equipment: a solar array, which converts sunlight into electricity; system controllers, which control the array and the pump; an electric motor, which drives the pump; and a water pump, which moves the water from a source to its delivery point. In the case study, the farm owners were interviewed to conduct site assessment which concluded that the water peak demand of the farm was 84 m3/day which required a 5.5kw pump. Secondly, HOMER Pro was used to model, optimize, and simulate water pumping systems. The system load is considered a deferrable load that requires a certain amount of energy within a given time period, but the exact timing is not important. Finally, the optimal system for irrigation of the farm was determined using the Net present Value (NPV) of the pumping systems based on the results from the HOMER simulation.

Homer Pro is used to model the water pumping system. During the modeling phase, three optimal scenarios were chosen. The first scenario was introduced to optimize the existing diesel system size from 11kW “the actual size” to 3.3kW “optimal size”.

Fig. 4. Schematic diagram of the base case

For the second scenario, components chosen to carry out the study included a Genset 3.3kW, 6.14kW solar panels with a 4.41kW converter. The optimal system was found to be a PV –diesel hybrid system at NPC of $20,157 and an LCOE of 0.234 $/kWh. The third scenario was a solar system contains a 7.5kW solar panel with a 4.4kW DC/AC converter, the NPV of the system is 21,495 and the LCOE is 0.249 $/kWh. This scenario was considered more applicable than the hybrid system since it does not depend on Diesel fuel which suffers from scarcity and price instability.

Finally, relying on an interview, software results, observations and data, it is concluded that Sudan in general and Al-Ailfun district specifically have abundant resources for irrigation schemes using solar water pumping technology, this could significantly improve agricultural production and the status of food security which lead to improving the standard of living for farmers and country’s economic development.

Besides her interest in the environment and renewable energy notably Solar, she is Human Rights and gender equality influencer.

[3] Food and Agriculture Organization Of The United Nations, TRANSFORMING AGRICULTURE FOOD AND TO ACHIEVE THE SDGs. 2018. Available: http://www.fao.org/3/i9900en/i9900en.pdf

Mechanical engineer and researcher with an interest in energy policy, energy market, and implementations of Waste to energy technologies especially biogas production.