Responses and mitigations to the impacts of climate change have hastened the world’s transition to clean energy. Renewable energy accounted for about 9.5% of all global energy in 2017, a slight increase compared with the previous year, according to the [1]2018 World Energy Outlook published by the International Energy Agency. Renewable energy sources such as wind, solar, hydroelectric and geothermal power fall into this energy mix. [2]In 2020 the International Energy Agency reported that despite the Corona Virus pandemic, global energy capacity had jumped by 45% partially driven by the solar and wind energy boom. This is the largest annual rate of increase since 1999. Thanks to economies of scale, and technologies like efficient solar cells and larger wind turbines, these energy sources now compete with fossil fuels.

South Africa finds itself at point where it is pivoting and moving away from fossil fuel technologies and embracing innovative renewable technology solutions such as finding storage for orthodox renewable energy such as solar and wind. This pivot is on the back of commitments made under the Paris Agreement.  [3]Under Paris Agreement, South Africa has committed to keeping temperature increases well below 2°C above pre-industrial levels’ and seeking solutions that will assist in limiting temperature increases to 1,5°C above pre-industrial levels.  Thus, increasing South Africa’s capability to adapt to the effects of climate change and to foster climate resilience in a bid to achieving carbon neutrality from 2050 onwards.  South Africa is expected to encourage low greenhouse gases (GHG) emissions development without hindering food production.

Globally, green hydrogen is seen as a vector for clean energy, with industries and government devising the best ways to leverage it in order to implement company and national decarbonisation strategies. The rapid growth in renewable energy, and the concomitant falling cost of solar and wind has made the opportunity of producing green hydrogen very attractive. With the global community looking towards countries that have optimal energy resources to provide the blueprint for a decarbonised future. South Africa is in an amazing position to transform its own economy and supply green hydrogen to the world.

The World Economic Forum (WEF) in November 2020 named green hydrogen as one of the top 10 technologies.  [4]Green hydrogen is the production of hydrogen via wind and solar using electrolysis. It is starting to gain traction as wind and solar become cheaper and installations break record highs year after year.  Green hydrogen has been found to be most useful in the transportation sector, either through direct combustion and the generation of heat or the electrochemical reaction inside a fuel cell. Uses in the transportation sector is the most viable because of the carbon neutrality as the only by-product from the production of green hydrogen is water. 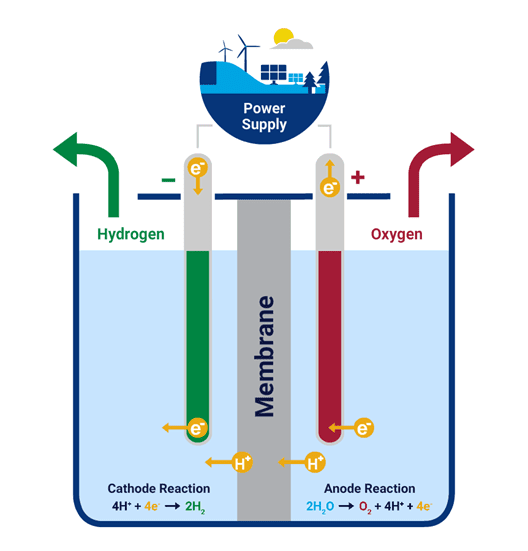 South Africa has [1]comparative advantage in the production of green hydrogen due to the fact that it holds 80% of the world’s platinum reserves and additionally is the domicile to world’s largest platinum mining companies. Platinum is a key component of fuel cells. The hydrogen economy presents an opportunity for South Africa to leverage Its platinum resources to develop a domestic hydrogen economy valued at up to $10 billion per year, and to tap into export potential of $100 billion per year.

Developing the green hydrogen sector has a cascade of potential benefits for South Africa, such the storage of renewable energy. Whilst storage and battery technologies are still in latent phase, the use of renewable to produce green hydrogen allows the energy produced to be stored as hydrogen. That energy can be used as a possible replacement of coal generated energy or perhaps supplement supply when demand is high. Green hydrogen can be seen as a means to unravel South Africa’s carbon positive petrochemical industry by assisting it to reduce emissions. Furthermore, the development of the sector provides South Africa with an innovative and sustainable technology capability that it could leverage on the world market. One of South Africa biggest trade partners Japan has signalled significant demand for hydrogen along with the European Union and South Korea. [1]According to Muhammed Patel of economic thinktank Trade & Industrial Policy Strategies; being an early adopter to the market would provide South Africa with an opportunity of being a competitive player on the global stage which would provide them with cost and scale advantages.

Most importantly, green hydrogen would help South Africa’s address its triple challenge of unemployment, poverty and inequality by using the sector as a mass employer and increasing economic growth. There is an opportunity to ensure that a just transition takes place as South Africa pivots away from carbon intensive technologies.

Lundi Ndudane brings extensive experience from the public, private and NGO sector. His work focuses on the intersection of politics, economics and business in the energy space. He has done work for Alexander Forbes, Standard Bank, Eskom, Porsche and Distell.